Chapter 15 - Father Of Mine

Nobody noticed the turn that Harrison's mood took over the next few days.  Everyone was too busy being excited over the proposal to pay any attention to a quiet teenage boy being even more quiet than usual. 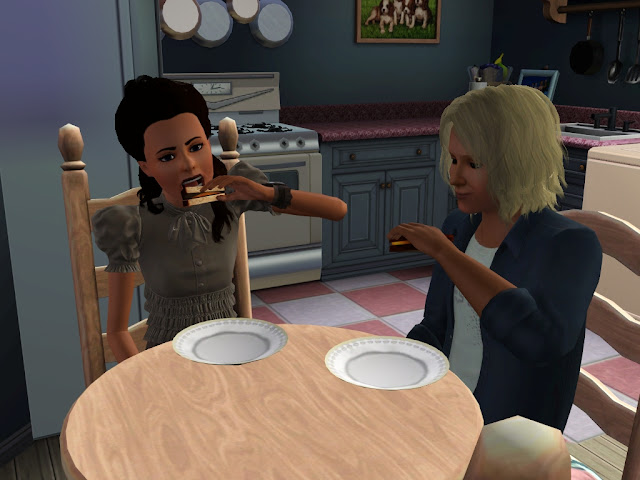 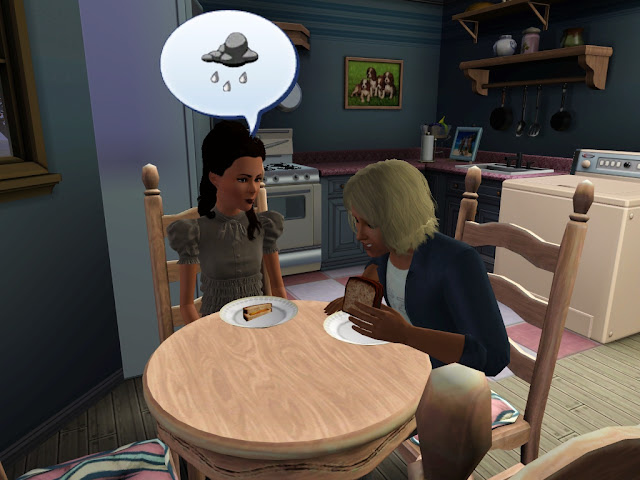 So even though he thought about it, many times, he didn't talk about the letter to Chloe, who was currently preoccupied with studying weather patterns and wondering if there was a way to optimise sunshine for the wedding. 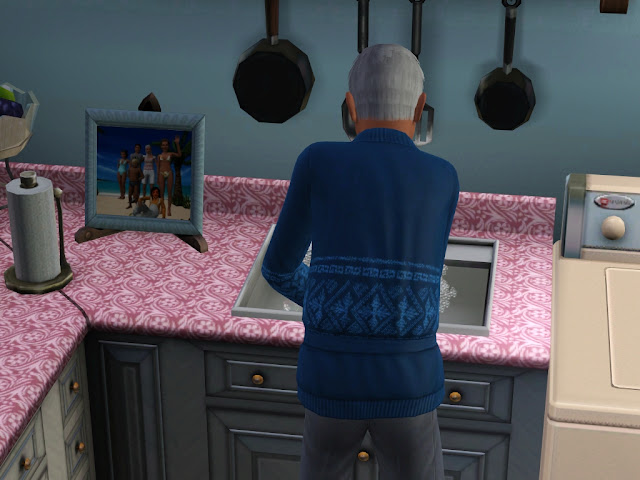 He didn't talk about it with his father who had gone on a spring cleaning frenzy, making sure the house was spotless for when Lawrence eventually moved in. 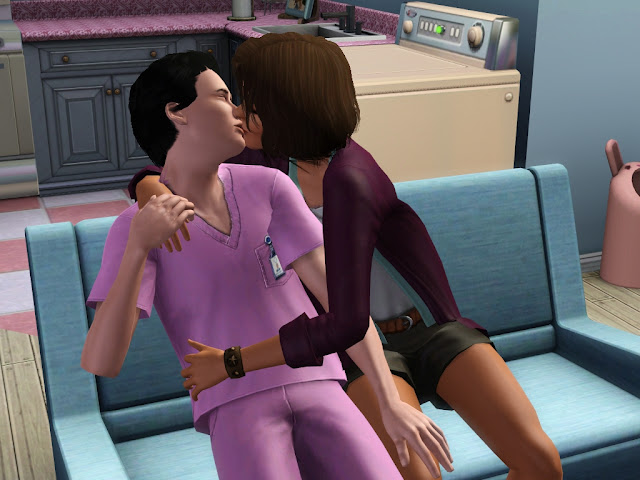 And he definitely didn't talk about it with Anastacia who was otherwise pre-occupied whenever she and Lawrence weren't at work. 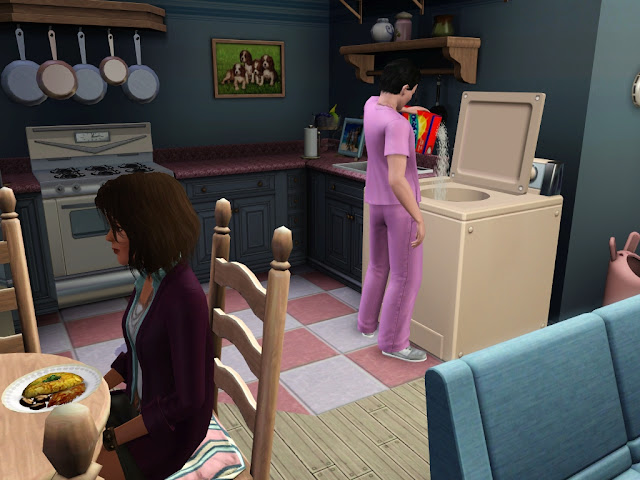 In fact, Lawrence had become a rather permanent fixture around the house in the evenings, despite not having officially moved in yet.  He was still working as a temp at the hospital until he'd raised enough money to self-finance his first film, and the one consolation for Harrison was the hours were long, so his sister's fiancée wasn't around all the time, just in the evenings.  But those were the times he felt like a stranger in his own home, knowing that Anastacia and Lawrence wanted their own space.  It was okay for Chloe, who was content to spend hours out in the garden, playing chess or star-gazing, but Harrison found that, increasingly. he needed to get out of the house. 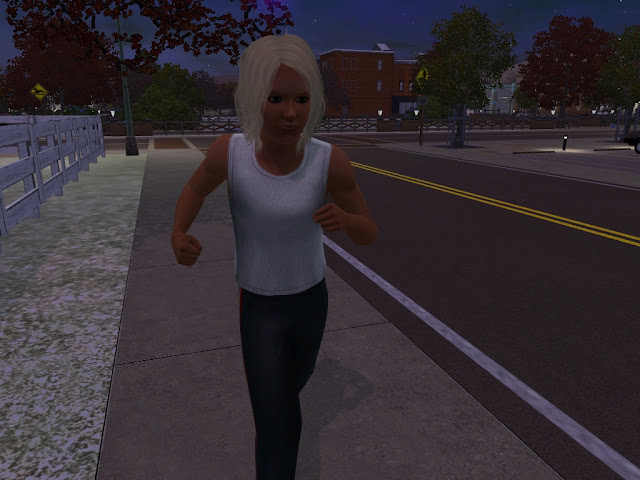 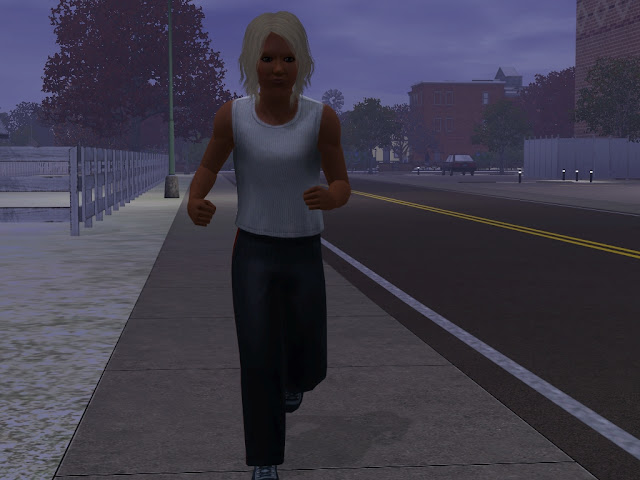 Jogging helped him to clear his mind and make run through the thought processes in a more level-headed way.  He had a lot to think about, and he needed to decide by this weekend what he wanted to do.

He also began to spend time at the library.  Hailey had always told him that it was one of her favourite places in the world, and Harrison was proud that a love of books was something he'd always had in common with his mum. 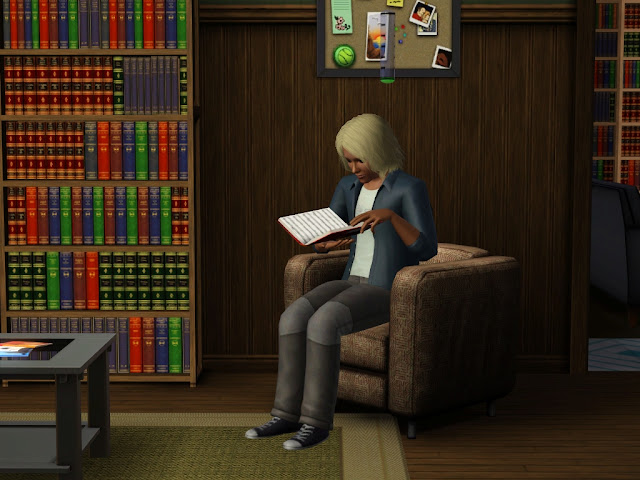 On Saturday, he spent the best part of the day there, trying to decide what to do about tonight.  At 6.50pm, ten minutes before the note had told him to meet outside the local theatre, he put the book he'd been reading back on the shelf and stood up.  This is it, he told himself.  No backing out.

It was starting to rain outside, and he cursed when he realised that his umbrella had broken.  He didn't have time to run home and get a new one, so he just gritted his teeth and walked the short distance to the movie theatre. 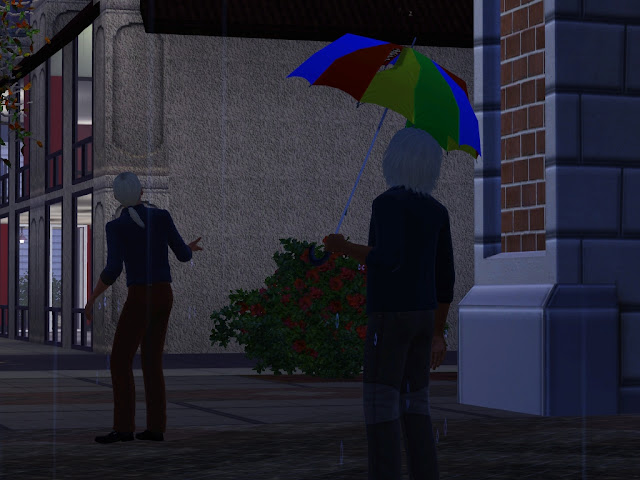 The figure was unmistakable from behind.  He'd always remembered that his father - his biological father - tied his hair back in a pony tail, and he hadn't changed his appearance one bit.  The man was standing out in the rain, as if amazed by it, and Harrison remembered that when he'd first come to Appaloosa Plains, he'd been pretty amazed too.  Did that mean that his father had been in Al-Simhara all this time, where Harrison couldn't remember it ever raining, even lightly?

"Hello," he called out.  The man turned and looked, and Harrison knew without any remaining doubt that it was his real father (though the word real seemed odd, and not right, not when Miles had brought him up for more years than this man stood in front of him.)

The man strode over and took Harrison in his arms, pulling him close. 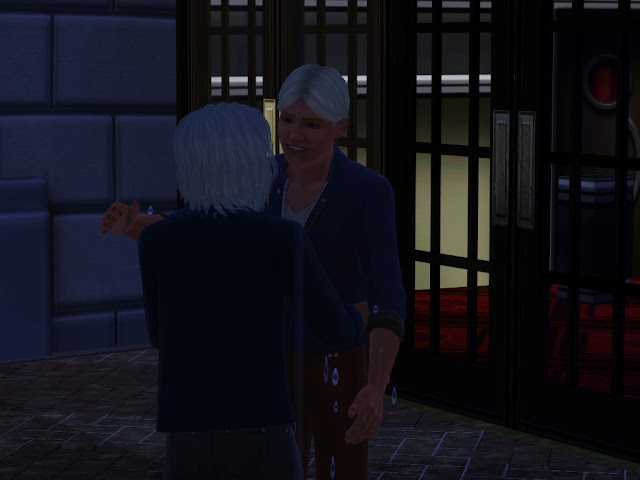 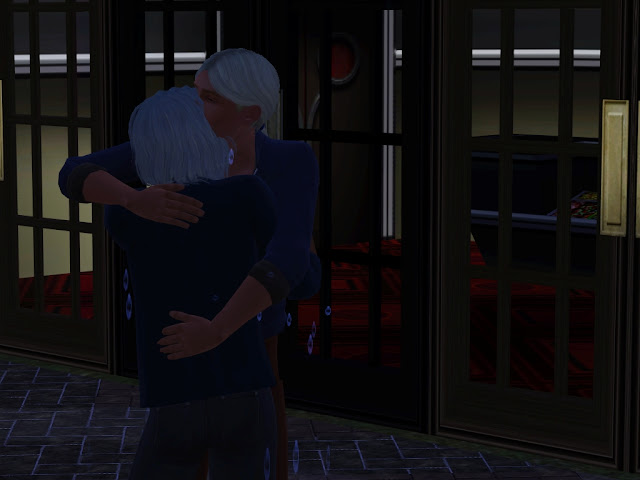 "I have missed you so much," he whispered into the teenager's ear.  "Harry.  My little Harry.  You're practically a man now." 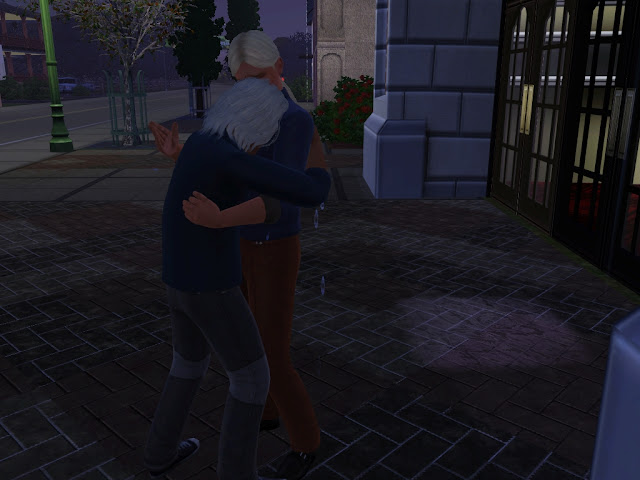 Despite vowing to himself that he wouldn't be affected by this - that he would listen to what this stranger had to say before walking away calmly - Harrison felt himself starting to sob.  The hurt that he'd felt at being left all those years ago came flooding out, and he pummelled his fists against his father's chest as he simultaneously sobbed into it. 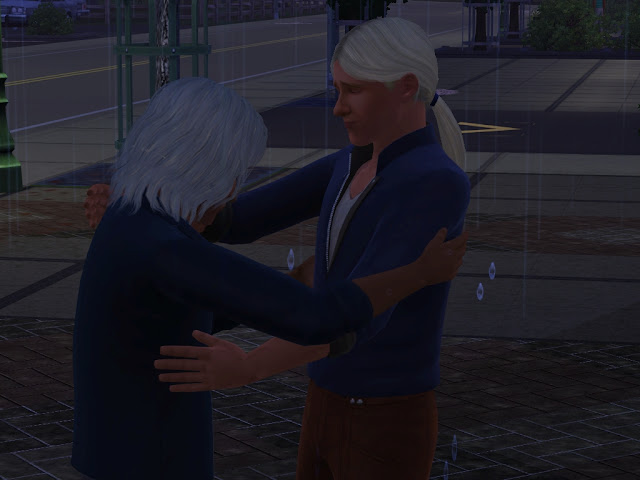 "I know you're angry at me, and you have every right to be," his father told him.  "Thank you for coming today.  You didn't owe me anything, and you came anyway.  I love you so much."

No, Harrison wanted to scream.  No, you don't love me.  Fathers don't leave their sons if they truly love them.  But he couldn't articulate his words; all he could do was grip onto his dad's arms until the sobbing subsided and he was able to speak more calmly.

"I want you to tell me why," he finally said, looking straight into the eyes that were so similar to his own.  "Why did you leave me?"

His father looked down at the floor, shaking his head.  "I knew you'd want to know that.  I don't know what I can say to you to -"

"The truth!" Harrison insisted.  "I just want you to tell me the truth.  I was seven years old!  What made you leave a seven year old boy in a strange country to fend for himself?  What kind of parent does that?!" 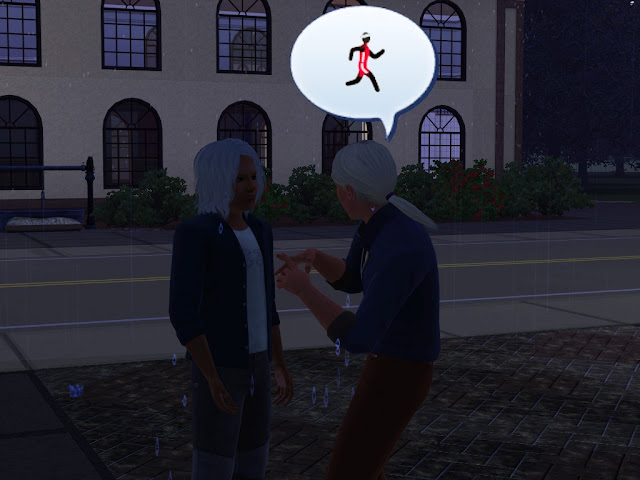 "They told me to run," his father said, his hands gesturing wildly to back up his words.  "MorcuCorp.  They told me they would kill me, and you too, if they ever found me.  I couldn't risk it, Harrison.  I knew too much and they were angry.  I ran to protect you."

Harrison laughed bitterly.  "You left me in their nest and you thought you were protecting me?  Did you move country, huh, dad?  Did you leave Egypt behind because you were so scared for your life?"

His father shook his head.  "No.  I continued my research somewhere else in Egypt.  Someone had to, Harrison.  This is what you don't understand.  I may have left you, but I've saved many lives.  It was a compromise I had to make."

Harrison felt himself shaking with anger.  His father just didn't get it.  "I was your son," he said pleadingly.  "You should have protected me first.  You should have got us out of the country, like Hailey did when she found me, and taken me somewhere safe.  Somewhere like here.  Don't you get it?  You carried on in Egypt despite the risk.  You didn't leave me because you wanted to protect me.  You left me because your work was too important to stop.  Your work was more important than me.  Your son.  And I am never going to forgive you for that." 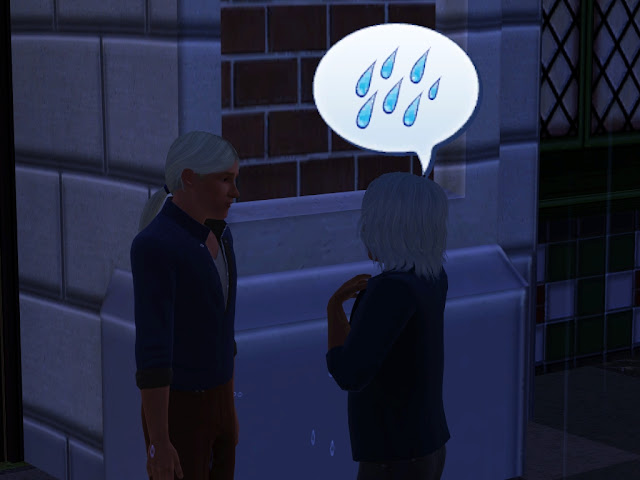 His father looked at him, taken aback by the harsh words, and Harrison continued, needing to get everything out now, in case he never got another chance.  "When I came here, it rained for a week.  Do you know that?  Well, of course you don't. But I thought I was cursed.  My whole life, I've thought that there was something wrong with me.  And now... I'm looking at you and I'm realising that one man has screwed up my self-belief and made me feel like this.  And it wasn't anyone from MorcuCorp, and it wasn't anyone here.  It was you.  You did that to me."

"But don't you see, Harry?  That's why I'm here now!  I'm finished with my research, finished with MorcuCorp.  I want you to come with me somewhere, anywhere you want.  I want to make it up to you, and be your family again." 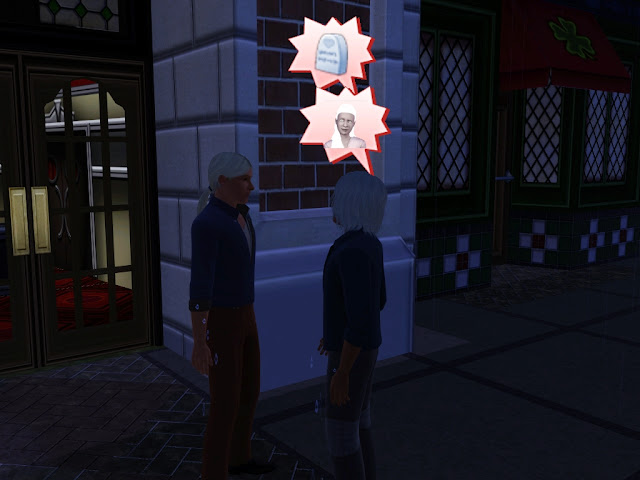 Harrison felt his hackles rising.  "I have a family.  Do you know about them?  I have three big sisters, and I have a father - a real father - who has never made me feel like I wasn't good enough.  And I had a mother, too. She died a few weeks ago, but she was amazing.  She brought me here and gave me a home, and I miss her so much.  You?  I haven't missed you for years, and now you're here, the only thing I want you to do is get out of my life.  You've got no rights, no responsibilities.  You gave them up when you left me alone in Egypt.  That was the end of our relationship, right there, ten years ago, so you've wasted your time coming here.  I want nothing to do with you anymore." 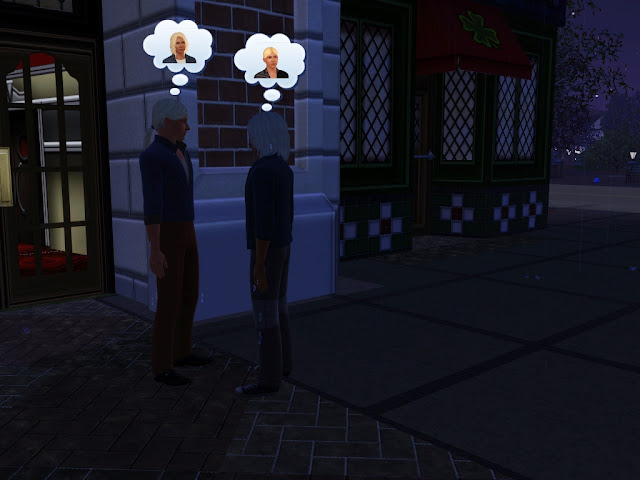 His father - no, not his father, this man in front of him - swallowed away tears, his posture straightening.

"This is really what you want?  I'm not going to come here again, Harrison.  It's now or never."

"Never isn't a strong enough word," Harrison spat out.  He turned, and walked, and kept on walking, knowing that the man was still looking at him, waiting for him to turn back around, to change his mind.  But Harrison wouldn't ever change his mind.  That man was a stranger to him, and he owed him nothing.

He walked all night, and as the sun came up he found himself down by the old pier on the west side of the Plains.  The water here was grey and cold but Harrison knew what he needed to do. 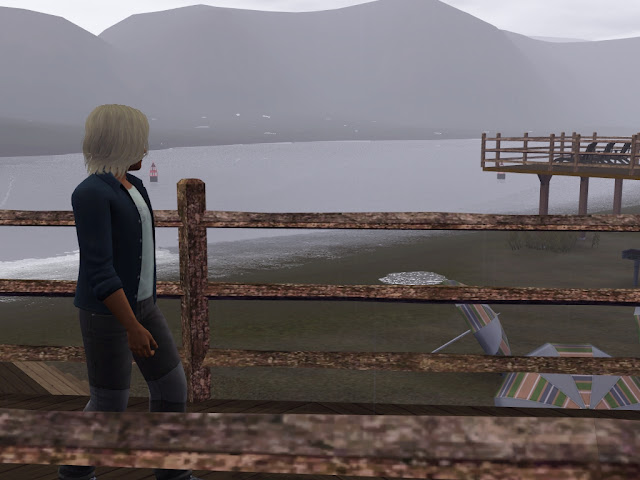 He left his clothes in a bundle on the pier and then waded into the freezing water.  It was a beautiful morning - clear and crisp - and Harrison breathed in the air of Appaloosa Plains, knowing that this place was in his blood now, and to leave it when there was still so much to discover would have been the biggest mistake of his life. 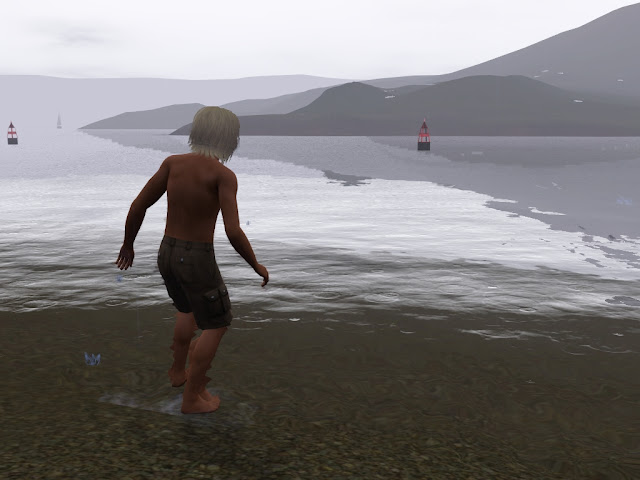 When he got to waist-deep height, he braced himself... 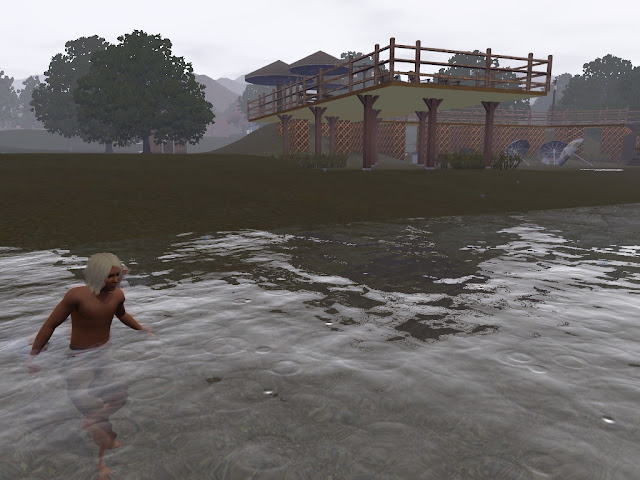 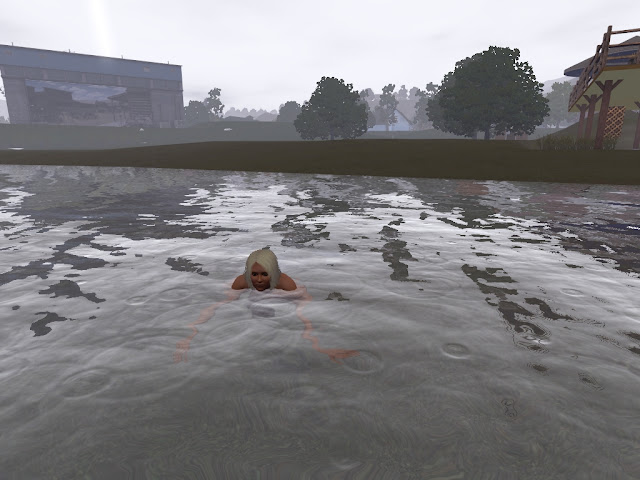 ...and plunged the rest of his body underwater.  He swam for ages, letting the water cleanse his body, until he'd exhausted himself with his exertions and was so cold that he wasn't able to think about anything but the sensations of this morning swim. 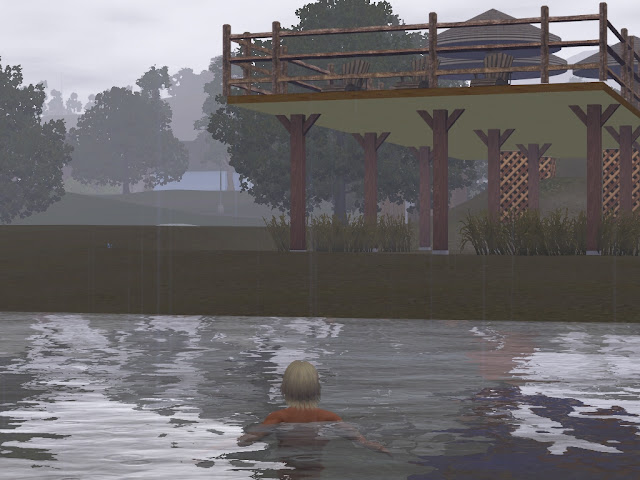 The rain beat down on the water, creating ripples, and Harrison looked back, at the pier but further - across the trees and Plains.  His mind told him one thing, and one thing only.  Home.


Notes: This is likely to be Harrison's last 'big' chapter - not to say that he won't feature again, as of course he will (he's still a little way off aging up) but I've spent a lot of time telling his story and I think this chapter is the inevitable, and positive, conclusion for his troubles.  Who knows, though, he might spark my imagination again, but I think it's time to focus on the second generation in more detail now.  I'm really proud of this chapter and I hope you enjoyed reading it. :)
Posted by Elly at 11:55