Chapter 2: How Much Is That Doggy?

Hailey loved dogs.  It was one of the things Miles found most endearing about her, the fact that she seemed to trust dogs more than most humans, and they would often head down to the park so that Hailey could coo over the puppies that residents of Appaloosa Plains would bring out on their daily walks.  Miles had to admit, some of them were pretty cute. 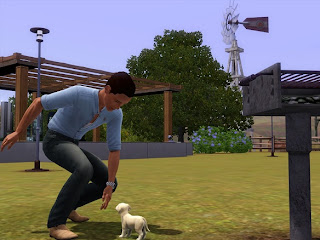 Money was tight, and they couldn't afford one of the expensive pure breeds that a lot of people round here went for. Hailey considered this to be an unnecessary luxury anyway; she wasn't fussy when it came to dogs, she just wanted one, any one, to call her own; as long as it had "an alert pair of eyes and a strong, cold nose," she would be happy.  So Miles kept an eye out for any adoption pups, and was eventually rewarded with a call from the adoption centre whilst he was at work one day.  Yumi, a bitch mutt with unknown parentage, but promising hunting skills and a non-aggressive nature was looking for a home, and was Miles interested?

Of course Miles was interested.  He told Hailey the address she needed to go to, and after much squealing and declarations of love, Hailey hung up to go and collect the squirming, excitable bundle of fur.  Once she was home, Yumi quickly settled into the house, especially loving the warmth of the tiny little kitchenette.  Hailey didn't mind too much, loving the way Yumi's tiny little paws would slide on the slippery tiles. 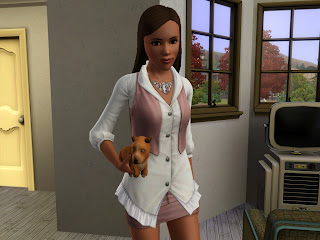 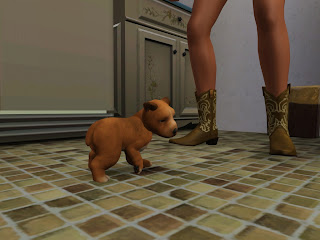 After a small home marriage, Miles and Hailey (and Yumi, of course) quickly fell into a pattern of domestic bliss; Miles would change into his uniform in the morning as Hailey dazed peacefully in the creaky old bed... 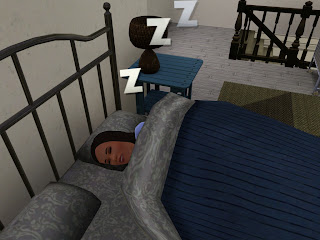 He would then head off to work... 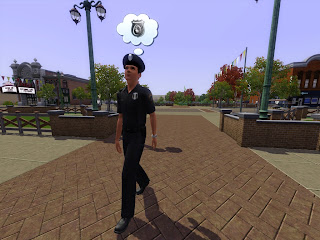 And Hailey would get up to tend the fruit and veg patch in the garden... 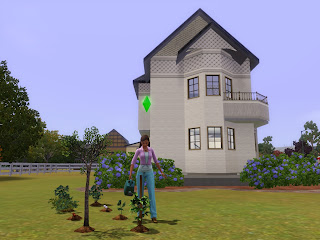 Miles wasn't entirely sure when she'd first told him her plans for self-employment as a gardener; he wondered if it was simply a ruse for Hailey to stay at home with her feet up, but as the weeks went by, he realised that she was turning her little patch of strange looking plants into genuine, sellable produce, and he couldn't deny the meals she cooked with home-grown ingredients were absolutely delicious.

In fact, it was just as Miles was sitting down to one such meal that Hailey dropped the first real bombshell of their relationship. 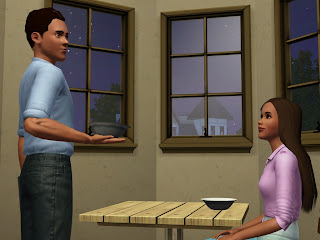 "Late for what?"  Miles looked up at her, puzzled, and she sighed out loud.

Miles didn't consider himself to be the most astute of sims when it came to the female anatomy, but he was pretty sure he did get what she was saying now.  He put his soup spoon down and stared at her.  "You're sure?"

Inside, he felt like he wanted to scream with excitement, run around, do something, but he was pretty sure Hailey would kill him, and he didn't want to scare Yumi who was currently curled up in front of the TV.  So he took a deep breath and nodded.  No, it wasn't ideal; they could barely afford furniture, had no spare room for a nursery, and he was working all the hours his job gave him in the hope of promotion.  But he was happy.  He'd always imagined himself with a large family, and he couldn't help but mentally pinch himself.  He'd married a beautiful girl, a girl he'd always dreamt about but never dared hoped he'd spend the rest of his life with, and here she was telling him that she was carrying his baby. 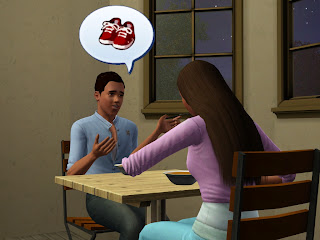 He felt like he couldn't listen, breathless, in case she told him she didn't want it.  But her eyes sparkled as she reached across for her hand.

"I thought I'd be happy with just Yumi, that she'd cure my broodiness for a few years" Hailey laughed. "But you know what?  I didn't panic when I realised.  I just felt like it was supposed to happen, you know?  I don't care if it's unplanned.  This baby belongs in this world, with us as its parents."

Miles started to say something, but he wasn't sure what, and the words stuck in his throat anyway.  It didn't matter; Hailey knew exactly what he was trying to communicate, and she squeezed his hand.  "I never realised it could be this easy to have everything you needed," she confided in him.  "I am so, so blessed." 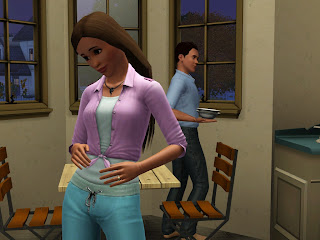 As Miles cleared up after dinner, he caught Hailey running her hands shyly across her belly, as if finally allowing herself to say hello.  He'd never seen her look happier, and he vowed to himself that he would do everything in his power to give this unborn child the upbringing it deserved.

Notes: I feel this all a bit boring and rushed, so apologies if you're thinking the same thing!  My own playing style isn't to set up lots of scenarios that require CC etc in order to make them more realistic, just because I like my own Sims to have a more 'cartoon' feel (doesn't mean I don't love reading blogs which use it!)  But I will try and develop the story a bit more in terms of drama; it's just hard at the moment as I took so few photos of these important milestones in Miles and Hailey's lives.  On Yumi: she's an adopted in-game dog, and you'll see soon that she turns out to the World's Ugliest Dog, but in kind of a cute way, lol.  She's an awesome dog, though, even if she is constantly switching from Miles to Hailey and back again as her BFF.  She's very fickle! :D