After Miles returned from Al Simhara, life continued much as usual.  The house began to feel a lot smaller, with both an inquisitive toddler and an excitable puppy underfoot, but with Miles' new promotion to Vice Squad following his success abroad, he was working shorter hours for better pay, and was therefore able to help round the house with much more energy when he arrived home. 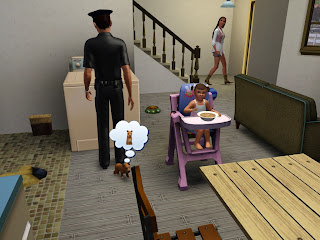 One day, after a long, refreshing shower, he noticed that Yumi had grown... a lot bigger.  He did a double-take when he saw her.  "Damn," he commented.  "You're never going to win any beauty queen awards, are you girl?" 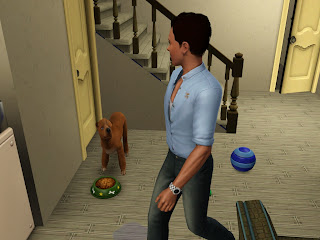 Yumi blinked at him, and seemed to shrug, before going back to her bowl of food.  It wasn't like Miles or Hailey cared; she was an ideal hunting dog, always sniffing out something interesting, and she was endlessly patient with Anasatcia's attempts to poke and prod her. 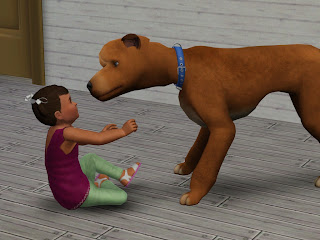 She didn't even mind that Anastacia, who was learning to talk, would scream "UMMMI!" at her instead of her proper name.  Yumi was just a ridiculously laid back dog now she had reached her adult life, and Miles loved her for it.  Even if she did look a little like Scooby Doo.

One day, Hailey was hanging out the washing when she felt an unexpected twinge in her stomach. 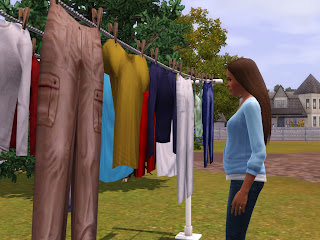 Like before, the pregnancy caught her completely off-guard, but at least this time, her and Miles had discussed their future hopes and aspirations with a little more detail.  They both agreed that they wanted a bigger family, and now they had a little more money coming in, it seemed to be more of a possibility.  But they were also realistic; with barely any money saved, three children would have to be the maximum.  Hailey had hoped for at least a five year age difference between their first and second child, but life didn't always go as planned, and it looked like it would be a matter of just a couple of years.

She decided she wasn't going to stress during this pregnancy, and on Miles' insistence, one day after he had returned home from work (looking handsome, she thought, in his uniform) she took herself down to the day spa for a bit of a pampering. 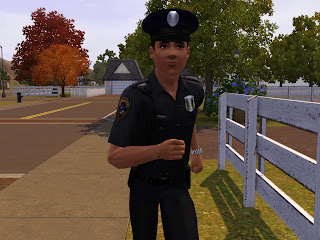 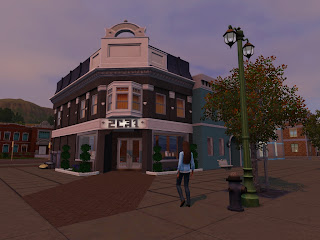 When she returned home, feeling more polished and glowing than she had in months, building work had started on an extension to the house.  Miles smiled at her sheepishly.  "It will just be a few days and it will be done.  I know we can't afford to decorate it nicely or anything, and it's not going to turn the place into a mansion by any means, but it will give Ana and the new baby a little space of their own.  They can't both sleep in our room, we'll go mad!"
And so, when Hailey and Miles brought back their second baby from the hospital - another little girl, this one named Jennifer - they were able to put her into the tiny, newly built nursery.  Even without any decorations, Hailey fully approved, because it meant that for once, she might have a night's interrupted sleep. 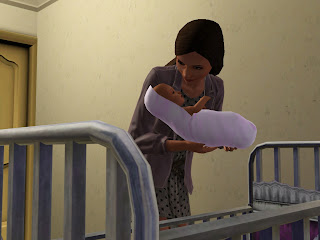 Notes: I'm going to try and just get the next few updates out quickly so I'm a little more up to date.  I'm now well into Gen 2 in my game and I'm barely into Gen. 1 on this blog!  Just a note on the building work: the family live in one of the starter homes in Appaloosa Plains (can't remember the name of it, but it's empty when you first load the neighbourhood, and is right by the town centre) and it in theory has lots of space for expansion as the garden is big.  However, I could NOT for the life of me get the roof to work when I added the extension I wanted to add onto it.  Lord knows why, although I am a terrible builder, to be fair.  So the extension I built is TEENY TINY and the house is still ridiculously small for a family of their size, but due to the Generational Goal for Gen 2 meaning I need to keep quite a lot of money in reserve, I won't be able to move them into a bigger house for a while yet.  :-/  I'll post pictures of the house in more detail in a future update.
Posted by Elly at 12:42