The birth of Jennifer brought about something that Miles had been worried about for a while; Hailey, he could see, was completely and utterly exhausted.  He reflected on the fact that his time in Al-Simhara had given him a bit of breathing space to unwind, even if he had been kept busy the whole time, and he wondered whether a break would have a similar effect on Hailey.

At first she was reluctant, wondering how Miles would cope with the two girls on his own, but he was ready for that.  "It's just going to be for a long weekend, and I'm sure that we can afford a babysitter if things get really bad."

Hailey had to admit that she did want to visit Champ Les Sims in France.  The produce she was growing was gaining attention locally, and she thought it would be a good time to look into Nectar Making.  She didn't know if she would ever make it as a serious commercial venture, but it wouldn't hurt to investigate.

So after booking a last minute flight, and tearfully kissing her family goodbye, she took the short flight to France.

Champ Les Sims was beautiful.  Hailey loved the small cobbled streets, the sophisticated nature of the Sims she met... and she especially loved the nectar.  She was staying at the Nectary on the far side of the village, and drank more than her fair share of the samples made available to her as part of the holiday package. 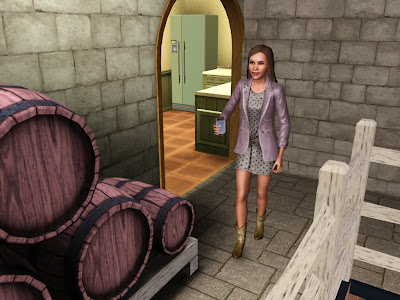 It was almost easy to forget, as she sipped on the sweet, hazy concoction, that she was the mother to two rapidly growing girls.  She wouldn't change it for anything, but being here was a lucid reminder that she had spent her entire life in Appaloosa Plains, and it made her feel sad, for some unfathomable reason.  She took another sip and shook her head.  It was silly to regret any aspect of her life.  She was happy, blissfully so.  It was just... well, she wasn't really sure what was playing on her mind.

The next day she tried her hand at Nectar Making.  It felt funny to strip off to her swimming costume in order to squish the fruit underfoot, but she didn't want to ruin the outfit she'd bought especially for this trip, so she got changed before stepping into the large barrel.  It felt funny at first, but she soon got into it, squishing at the fruit enthusiastically. 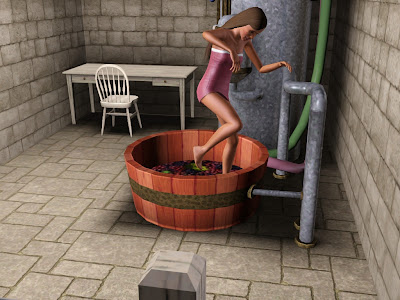 Her first attempt at making nectar didn't go too badly, and she was able to sell it to the owner of the Nectary at a slight profit, considering she'd harvested the fruit free of charge in the Nectary's own orchard.

Later that afternoon she wondered into the town centre.  She decided to ring Miles to see how he was getting on, and was surprised at how calm he sounded when he answered. 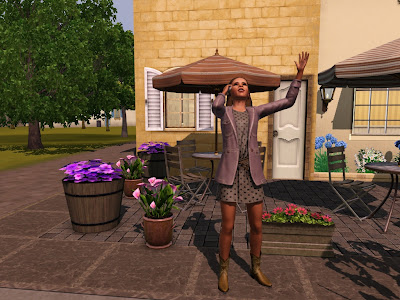 "I'm having a lovely time!" she assured him.  "How are Ana and Jennifer?"

"They're both fine.  I think they're almost due to transition.  Can you believe how quickly they grow up?  I think Ana might do it tonight, actually.  She's able to read Oh The Destinations You'll Briefly Visit on her own.  She loves that book.  And Jennifer is just the happiest baby I've ever seen.  Seriously, Hails, I love being able to do this dad thing with them properly."

"Oh," Hailey said, feeling a little anxious.  "I wanted to be there for their birthdays.  What if Ana blames me for not being there?  You know how sensitive children can be."

"Not Anastacia," Miles laughed.  "She's a tough little cookie.  She'll be fine.  She misses you, but that's natural.  Seriously, enjoy yourself, you've earned it."

Hailey paused, then sighed, nodding.  "You're right, this does feel like it's doing me the world of good."

"Excellent.  Now go and treat yourself to some of that fancy French cuisine you've been raving about.  Love you."

Hailey spent the afternoon reading up on the finer points of Nectar Making whilst basking in the warm sunshine. 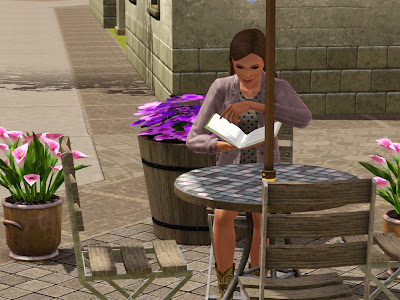 After a delicious meal, she started to head back to the Nectary.  As she was walking past the quaint little bookstore, she heard a sharp wolf-whistle and a man dressed head to toe in blue stepped in front of her.  He attempted a wink. 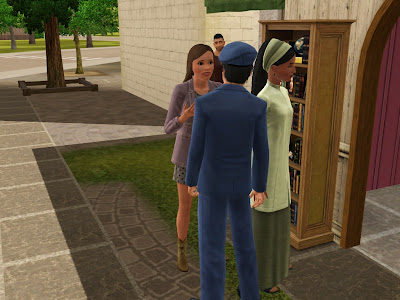 "Do you have something in your eye?"
"Non, mais... you 'av eyes like ze moonlight sky, oui?"
Hailey blushed swiftly.  "Oh," she giggled.
"Et your skin, ze colour of rose petals..."
She blushed even harder before remembering herself.  "I am a married woman," she told him sternly, showing the Frenchman her wedding ring.  "Now, if you'll excuse me."
She walked away and felt his eyes burning into her as she left.  The rumours must be true; French men were the most incorrigible flirts!
***
Back in Appaloosa Plains, Miles' prediction that Anastacia would age up soon proved to be correct; not only that, but Jennifer also grew into a toddler at almost exactly the same time.  He hoped Hailey wasn't too upset at missing her daughter's birthdays.
He enrolled Anastacia into the local comprehensive and took her along the next day.  She was a confident, enthusiastic girl, and he knew she'd be absolutely fine there.  One thing she didn't seem thrilled about, however, was the prospect of homework, so as soon as she got home from school that day, and he returned home from work (after paying the babysitter for Jennifer), he insisted they tackle it together.  Anastacia looked up from brushing Yumi and sighed. 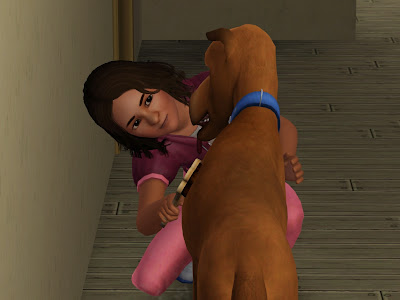 "Fine."
They sat down on the kitchen floor (Miles wasn't exactly sure why, but he figured that if Anastacia preferred it there, it was better than not doing it at all) and started on the sums that
her new Maths teacher had set. 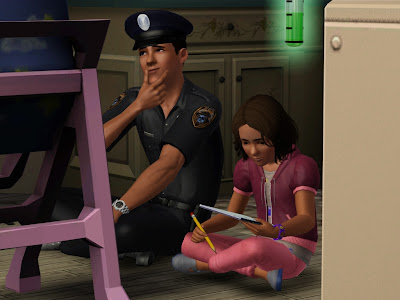 "Hmm, I... well, Maths was never my strong point.  How about Atheletics.  Do you do that yet?"

"Ugh, I wish.  That would be my favouritest too.  Can you teach me how to kick a ball really far?" 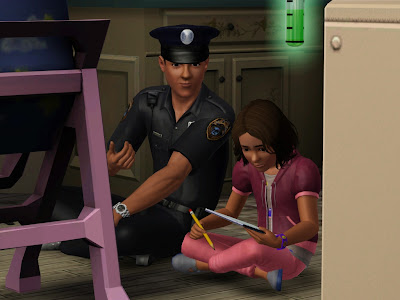 They muddled through the sums together, as Jennifer played with her blocks, clapping happily at how easy it was to fit the right shapes through the right holes. 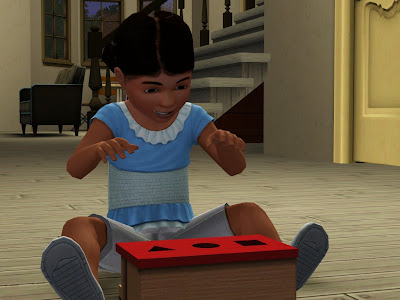 Later that evening, Miles heated up some leftover waffles and listened as Anastacia brought up the subject of exercise again. 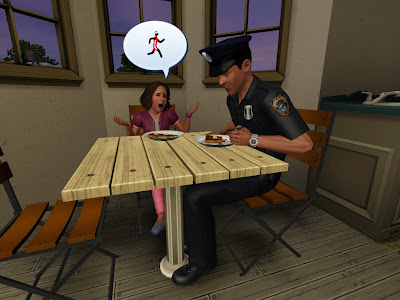 "Who's the fastest runner in the world, daddy?  Could I beat them if I trained hard enough?"
"Usain Bolt, and no chance.  Your legs are too short."
"I'll beat him one day, you wait.  I can't help it if I've got short legs.  I can go really, really fast.  Do you want to race me?  I bet I can go faster than you, can't I?  Huh?  Huh?"
"Eat your waffles, Ana."
***
That weekend, Miles awoke to something moving against him on the other side of the bed.  His heart lifted; Hailey?! 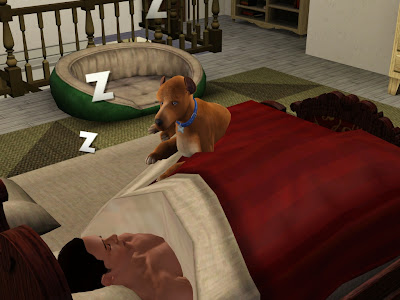 But then he looked up to see Yumi staring at him in adoration.  He sighed.  "Not quite the surprise I was expecting, girl."
Miles decided it was time to spruce the place up a little.  He dropped Anastacia and Jennifer round a friend's and got down to the task of wallpapering and carpeting the upstairs and downstairs bedroom.  It was a small house, and he worked quickly.  He wanted Hailey to come home to something special, and that spurred him on.  With her favourite colours, and his, in mind, he spent Sunday shopping for new items, taking Anastacia along with him to pick out items for her own room.
Finally, he was finished, and he smiled, looking round.  He was certain Hailey would love it. 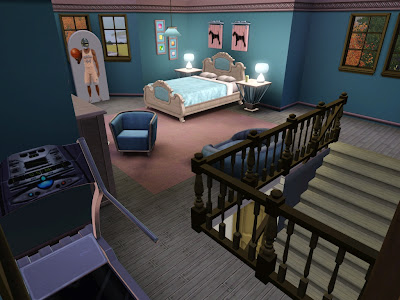 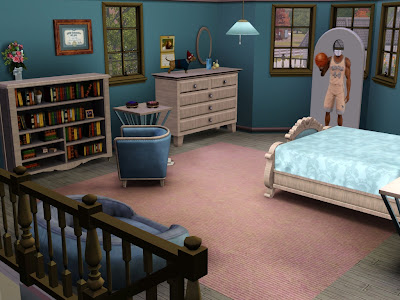 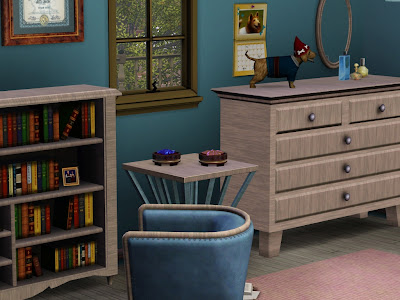 He wasn't much of an interior designer but he figured Hailey would love the little reading nook he'd created for her, as well as the dog-related pictures and objects.  For himself, well, he couldn't resist a little sports memorabilia, but mostly he was just excited about the treadmill that he could finally afford.  The pink and blue together looked kind of sickly, he thought, but he loved blue, and Hailey loved pink, so he'd had to compromise. 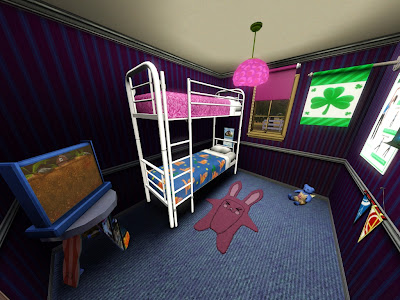 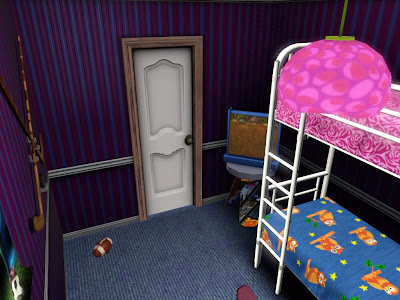 Anastacia's room as a lot smaller, and a lot quicker to decorate.  Her favourite colour was Spiceberry but she conceded that there could be some blue in there for when Jennifer transitioned and inevitably moved into the 'big girl's room'.  Like Miles, she insisted on lots of sports-related decoration, although the green Irish flag was a small touch that made Miles smile; Anastacia had developed the Lucky trait when she'd grown into a child.
The kitchen wouldn't be quite finished before Hailey came back, but Miles knew she'd love the progress he'd already made.
***
Hailey would miss Champ Les Sims.  She stopped off in the town centre on her way back to the airport and gave it a sad wave. 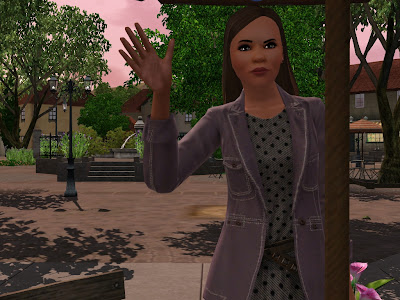 She wouldn't miss the men here - she'd decided they were all strange and lecherous, and not as handsome as Miles by a long shot - but she would definitely miss the other aspects of its culture.  Still, she had been missing her children even more, and couldn't wait to see them. When she arrived back in Appaloosa Plains, dusk was falling and Anastacia was playing on her new see-saw.  It was strange, because she seemed to be talking to someone even though Hailey could clearly see, even in the dark, that there was nobody sitting on the other end. 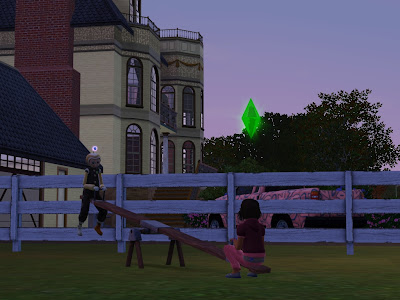 "Mama!" Anastacia hurtled herself at Hailey and hugged her legs tightly.  "Wait 'til you see my new bedroom, it looks AMAZING.  I missed you mummy, don't go away again!"
"Not for ages," Hailey promised, kissing her daughter's unruly mop of hair.  "Where's your daddy?"
"Inside," Anastacia said, going back to the see-saw.  "Sorry, I have to get back to Patterns."
Hailey decided now to question her, deciding she was far too tired to make sense of Ana's conversation.  She looked up to see Miles standing at the door, and she gasped when Jennifer came toddling over to her, walking unsteadily. 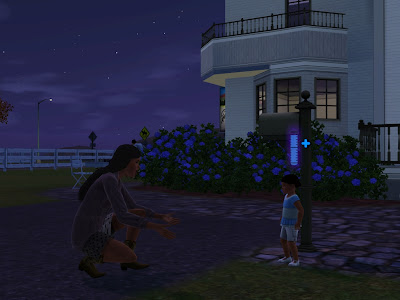 "Oh, Miles, she's walking!"
"I've been a busy house-husband whilst you've been gone," he commented, grinning.  He planted a kiss on her cheek as she scooped a beaming Jennifer into her arms.  "In fact," he said, nuzzling against her ear, "I'm probably due some pretty major brownie points."
Hailey smiled back at him and rested her cheek against his.  "Well, why don't we put the kids to bed, then, and start working on that?"
Judging from Miles' face, Hailey knew there wouldn't be any objections.
Notes: Loooong chapter.  I'm still majorly behind updating this blog, so I figured I'd do a couple of longer updates to hopefully rectify that.  The focus on Miles decorating the house was down to the Misc. Fun roll I had: It's So YOU.  :)  Strictly speaking, I should have decorated the house when Miles moved in, but he didn't have enough money at that point to do it properly, so I did it when he transitioned into an adult.  Also, I know the girls are growing up very quickly, but I'm literally using all the pictures I used and there were still not enough at this point to tell much of a 'story'.  I am getting to the point where I started taking a lot more pictures, though, so hopefully we'll get a little drama soon.  I realise it's all a bit sickly sweet at the moment! :D
Posted by Elly at 13:12