Chapter 3: The distance from A to where you'd B

Anastacia Cantrell was born some months later, and was naturally assigned the Athletic trait (which Miles was secretly pleased about, being an Athletic Sim himself).  Together, Hailey and Miles chose the Loves The Outdoors trait to compliment this.  Appaloosa Plains was the perfect place for outdoorsy Sims, and they wanted Anastacia to love growing up here.

She was feisty right from the start, but loved nothing more than snuggling up to her mum when feeling tired. 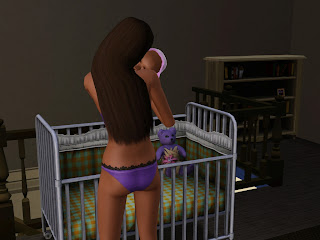 In the early days, Hailey took the reigns when it came to caring for her. The garden could wait, she decided, and they couldn't afford for her and Miles to be losing out on money, especially when Miles earned more than she did. Eventually, they wanted to extend the house to give Anastasica a room of her own.  At the moment, the crib was in their bedroom, and Hailey and Miles barely slept. 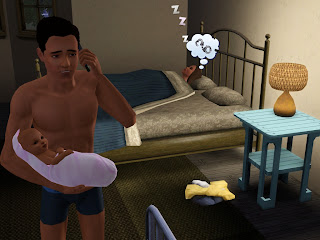 It was money which drove Miles to working long hours when all he wanted to do was curl up into bed, exhausted, or spend time with his family.  No such luck.  Miles was opportunistic; he felt compelled to take up any work or social-enhancing enterprise that came his way, and when his boss told him they wanted him to go to Egypt in order to investigate some foreign intelligence that might be relevant to Appaloosa Plains, his heart sank.  He knew it was for the good of his career and, ultimately, his family, but it was the last thing they needed right now.

Hailey took it surprisingly well, considering.  She agreed that the timing wasn't brilliant, but she told him she'd rather it was now than during Anastacia's all important toddler years. So Miles packed his case for a few week's stay at the Egyptian base camp.  He reminded himself how lucky he was; many Sims in Appaloosa Plains had never gone outside of their own backyard, and here he was riding on a moped in one of the most exciting countries in the world. 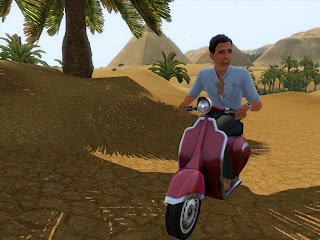 Hailey missed him terribly.  She was able to continue caring for Anastasia whilst keeping the house in good order, but all she wanted to see was Miles come home.  Most days she barely had enough time to change, or run a brush through her hair.  Anastacia continued to demand a lot of Hailey's time, and the fact that she was missing her daddy made things even worse, Hailey was sure of it. 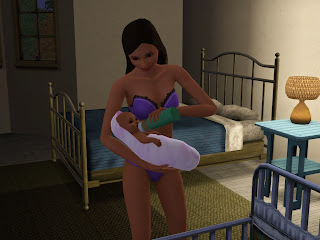 She kept in contact with Miles via letters, which she wrote during Anastacia's mid-afternoon naps, whilst the lights shone through the kitchen windows and she was able to force herself to stay awake.
Dear Miles
I hope you've made progress with that Top Secret MorcuCorp thing that I'm not allowed to ask you about.  The sooner you're done there, the sooner you'll be back here.  I love you and I miss you, and Anastacia does too.  Sometimes she looks at me like she's genuinely confused, as if she can't quite understand where you've gone. Well, that's not when she's wriggling around all over the place and forcing me to play with her until the small hours of the morning!
Nothing new has happened in Appaloosa Plains, that I've heard of anyway (I don't think I'd realise, I haven't been out of the house in days and am starting to go a little stir crazy.)  My sister is still trying to work out whether she should leave her scumbag cheating husband, but I'm a little sick of talking to her about it now.  She keeps crying when she comes round to see Anastacia, telling me I've got my whole life ahead of me and she's so old.  She's not even that old!  But she never listens to me so it's pointless trying to reassure her.
I hope that Al Simhara is as exciting as it seems to be in books.  One day I'd love to go myself, preferably with you!  Have you seen the Pyramids?  The Sphinx?  Just think, when Ana starts talking, you'll be able to tell her all about it.  She'll love the stories of her daddy, the adventurer!
Anyway, I should go, as Ana will be waking up soon.  Yumi is fine, by the way.  She barked at the fridge for about an hour straight yesterday, but I've come to expect that from her by now.
All my love
Hailey xxx 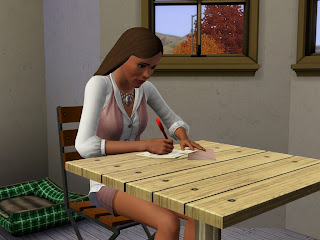 Miles read the letter over a meal of Shawarma and smiled to himself.  He would be travelling home soon, and couldn't wait to see his family again.  Even though it had only been a couple of weeks since he'd been away, he missed them more than he thought was humanly possible.  He had to laugh at Hailey's hopefulness at him being some kind of an explorer; he'd basically spent his entire time working with the locals in the area, and catching brief moments of sleep here and there, in order to stay alert enough to deal with any issues. 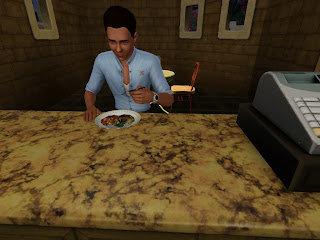 The next day, he travelled to The Date Palm House, where Fatima Amin lived.  He had been working with her closely during his stay here, as she knew some information about MorcuCorp that could potentially shed light on the shady organisation that seemed to work underneath the law.  All he had to do was persuade her to get herself and her family to a safe house that had been arranged by Miles, and then he would finally be able to go home. 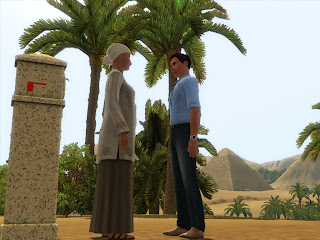 Fatima was resistant at first; this was her home, and she didn't want to leave it.  But, as Miles pointed out, with the HQ to a resistance movement against MorcuCorp underneath her house, it would only be a matter of time before they came looking for her.  He sympathised, wondering what it would be like to be banished from his own home simply for trying to do the right thing, but after explaining the situation carefully, Fatima eventually gave in.  Miles was pleased with himself; he'd been developing his persuasion skills recently and it made his job a lot easier.
When it was all over, he breathed a sigh of relief as he made the call for the taxi to pick him up and take him back to the airport.  It was a long flight, but once he was back in his own country, headed towards Appaloosa Plains, all the tension and the worry from the trip seemed to fade away.
When he got back into the house, Hailey was snuggling up to Yumi as Anastacia, who had just grown up into a toddler, ate contentedly in her highchair.  Miles took a moment to survey the scene, before Hailey noticed he was finally here, and he smiled, overwhelmed for a moment at how lucky he was to be able to come back to this. 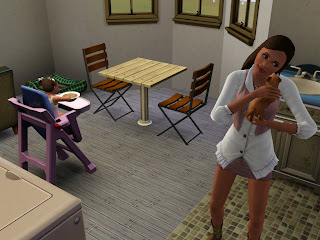 When Hailey did see him, she merely smiled prettily.  "The trash can is full, Mr Adventurer.  Would you mind taking it out?"
Miles laughed.  Yeah, he was definitely home.
﻿
Posted by Elly at 04:58